What is Ta’Ang language?

Ta’Ang also known as Palaung, is a Mon–Khmer dialect cluster spoken by over half a million people in , Shan State, Myanmar, and neighboring countries. The Ta’Ang people are divided into Palé, Rumai, and Shwe, and each of whom have their own language. The Riang languages are reported to be unintelligible or only understood with great difficulty by native speakers of the other Ta’Ang languages.

The Chinese government groups together the Palé, Riang, Rumai and Shwe peoples as the De'ang ethnic nationality. The group also includes the Danau (Danaw) who may no longer have a separate identity from the Palé.

Ta’Ang groups have made use of a variety of scripts to write their languages. In 1972, a standardized, official ‘Palaung script’ was adopted in Palaung communities. Groups of young people have been working to create an improved yòunthòunza, Burmese for ‘office-use script,’ meaning ‘official script,’ to overcome some of the inadequacies inherent in the older systems and in the 1972 script.

During the British colonial period (1885-1948), various Palaung groups used the Shan script to write their languages. Since independence in 1948, these groups have come into more direct contact with the Burmese people and their language, through government and educational institutions. Since the 1960s, the influence of Burmese has become stronger, displacing the older role of the Shan language in Palaung intellectual life. As a result, recent efforts to create Palaung orthographies have followed Burmese models. 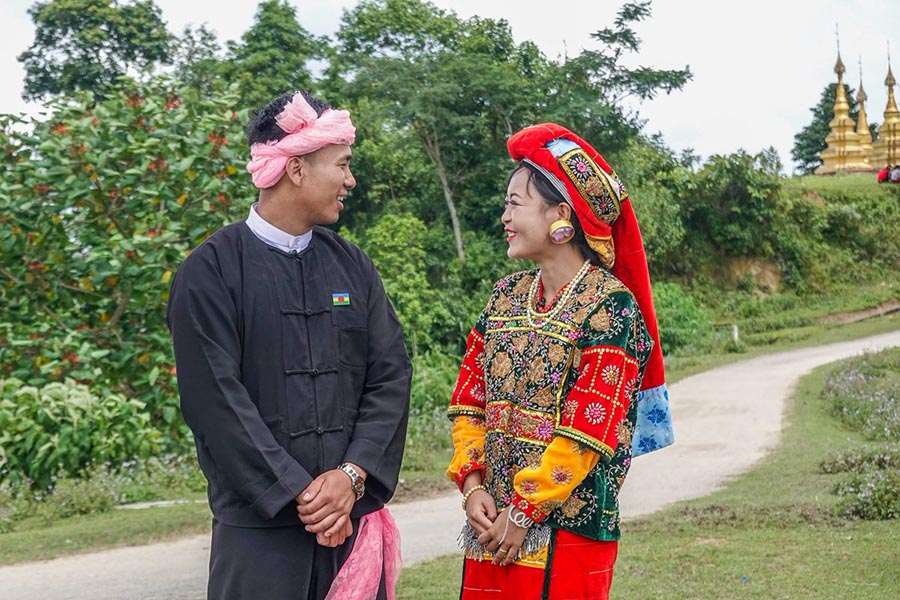 The Ta’Ang or Palaung are a Mon–Khmer ethnic minority found in Shan State of Myanmar, Yunnan Province of China and Northern Thailand. In China, they are referred to as the De'ang people.

They live mainly in the northern parts of Shan State in the Palaung Self-Administered Zone, with the capital at Namhsan.

The Ta'Ang (Palaung) State Liberation Army, the armed wing of the Palaung ethnic group, began fighting against the Burmese military in 1963. It entered a cease-fire agreement with the central government in April 1991, but is currently continuing the insurgency. Both the government and the rebel armies have derived benefit from poppy cultivation, which has caused serious drug addiction among the local people.

A total number of speakers is uncertain; there were 150,000 Shwe speakers in 1982, 272,000 Ruching (Palé) speakers in 2000, and 139,000 Rumai speakers at an unrecorded date. Ta’Ang or Palaung was classified as a "severely endangered" language in UNESCO's Atlas of the World's Languages in Danger.

We work with native Ta’Ang Translators

MYAN TRANS works with professional Ta’Ang linguists who hold university degree in Myanmar and abroad. Each of our professional native Ta’Ang translators are able to produce 1,500 to 1,800 words in English source words or 5 to 7 pages in a day. The qualified Ta’Ang translators translate various documents from different clients. Our Ta’Ang translation team can produce 9,000 words or 25 pages. Using CAT is familiar with them and easy to learn other new translation tools by the request of the client.

Myan Trans has proudly achieved its milestone, more than 100 + Ta’Ang language-based projects which are: